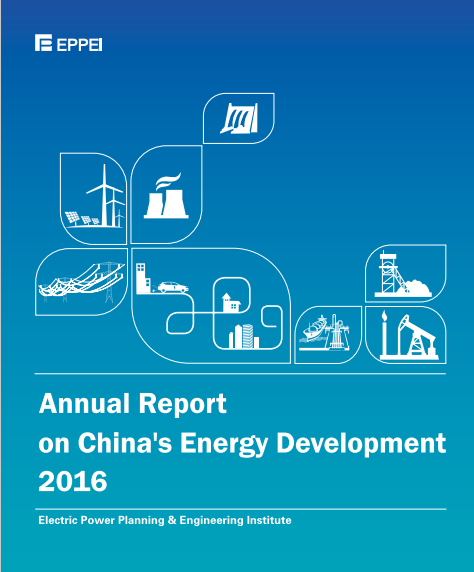 Energy is the motive power propelling the modern economy to develop. ’s energy industry has since reform and opening-up, especially during the 11th and 12th five-year plan periods, undergone leapfrog development, ascending one step after another, satisfying the demand of the economy and providing a sure guarantee for the national economic and social development.

With the economy entering into a state of new normal, the energy development has correspondingly assumed a series of new features, with the consumption growth speed slowing down, the general supply and demand easing up and the internal and external situation changing. The development objectives have for long been ensuring supply and demand and effectuating a transition toward a clean, low-carbon, safe and efficient modern energy system. So, to make a good study on the annual energy development, trying to know and grasp the new features and new laws governing the development of energy industry has, therefore, become an important task of ensuring a healthy development of the energy system under the new normal.

Electric Power Planning & Engineering Institute (EPPEI) took the initiative to adapt to the new situation of energy development and organize the compilation of an annual energy development report in a bid to provide sincere and better service to the government, enterprises and the society as a whole. The Annual Report on ’s Energy Development 2016 is the first of its kind. It has given an overall analysis of ’s energy development in 2016, striving to make it systematic and cover-all, concise but to the point and vivid and intuitive, and the key points prominent.

2016 is a year crucial in ’s energy development. In the year, a year for starting the implementation of the 13th Five-year Plan for National Economic and Social Development (2016-2020), a number of documents were released one after another, such as the 13th Five-year Plan for Energy Development and 14 subject-specific plans. The energy supply side structural reform was unfolded in the entire country. The work of optimizing the structure and upgrading the industry was progressing in sure steps. The institutional reform and science and technology innovation were going into depth. The international cooperation kept deepening. In the year, the objective of reducing excessive production capacity in the coal industry was fulfilled successfully. Non-fossil energy developed rapidly. The reform of the electric power system was going ahead in an all-round manner.

The curtain was raised in the reform of the petroleum and natural gas industry. But concomitantly, some new problems cropped up while the old ones remained unresolved. The big price hike of coal made it difficult to lower cost. The coal-fired power installed capacity and the utilization rate of the petroleum refining and petrochemical industry declined, worsening the risks of the industry. The exacerbated curtailment of wind power and PV power made it unfavorable for energy conservation and emissions reduction. The drive of replacing coal with gas was in the doldrums, hampering the development of clean energy. Opportunities and challenges co-exist; and so do hope and difficulty. The tasks are arduous and the road is long, although the development prospects are broad.

With the “four revolutions and one cooperation” leading the way, the Annual Report on China’s Energy Development 2016 has 7 chapters, covering the overall situation of energy consumption, energy supply, energy technology, energy policies, international cooperation and insights. It puts into order and summarizes the overall situation, giving a whole picture of the energy development in 2016, spelling out how the energy industry optimized the energy structure, raised energy efficiency, lowered cost, carried out technical innovation, propelled the institutional reform and ensured energy security. It takes stock of the good performances, identifies problems, forecasts the development trend and looks into the prospects of future development.

Sincere thanks go to the departments in charge of energy and related enterprises, institutions, well-known energy experts, who have rendered great support and professional guidance in the course of compiling the report. There might be drawbacks and negligence in the report. All criticisms are welcome from experts and readers.